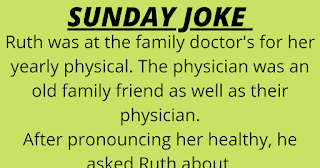 Ruth was at the family doctor's for her yearly physical. The physician was an old family friend as well as their physician.

After pronouncing her healthy, he asked Ruth about her husband, who hadn't been in for a while. "How's Jim doing?"

She replied, "Oh he's fine. But lately he hasn't ... well, let's just say that he hasn't had the wherewithal to do it all."

The doctor sighed and said, "Just have Jim come in and see me, I'll write him a prescription for Viagra and he'll be as good as new. Many of my patients use it as they are getting on it years. It really is quite effective."

The doctor shook his head. "Pride is a terrible thing. Ruth, I'll tell you what we will do. I'll write the scrip and you go have it filled. In the morning, grind one of them up and slip it in his morning coffee. It will start to work and he will think it is only nature taking its course. Problem solved"

Ruth said, "That sounds easy enough. I can do that."

The doctor ran into Ruth a couple of weeks later and asked whether their plan had worked. She replied, "Doctor, I am so mad about that I can't see straight!"

He looked at her and said, "What happened, did you grind it up like I told you?"

She responded, "I ground it up, put it in his morning coffee and pretty soon it must have taken effect. He grabbed me, threw me on the table and rips off my clothes. He then rips off his own clothes and in a moment we're acting like a couple of newlyweds."

The doctor then stated, "Well what's the problem? I thought that was what you wanted."

She said, "You don't understand, Doc. They've banned us from McDonald's for life!"